The Göltzschtal bridge and the Elstertal bridge are sights in Vogtland which cannot be missed, often literally. They are considered to be not only two of the greatest achievements of the German Railway Company of the time, but also of international architectural importance. 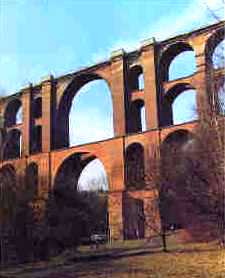 The Göltzschtal bridge is the biggest brick bridge in the world; the Elstertal bridge fondly referred to as its 'little sister'. Both attract thousands of visitors each year who come to admire the sheer splendour, high quality masonry and architectural design of the bridges. Seen in perspective of the time they were built and the limited technology available, the viaducts become even more awe-inspiring.

The two viaducts were built between the years 1846 and 1851 as part of the Saxon-Bavarian State railway. This was begun in 1841 and ran from Leipzig to Nuremberg. They were necessary to cross the deep Göltzsch and White Elster valleys but many were unconvinced that this could be done Tile locomotive engines at the time could only cope with an increase of 1 metre in every 100.

The fact that a 30m high brick bridge had recently collapsed in Northern Prance did nothing to inspire the people's confidence. The sheer size of the bridges and the weight of the. continuous rail traffic they would have to bear presented an unprecedented design task.
A competition was organised in 1845 with 81 entries submitted, none of which were deerned satisfactory The Examining Committee, comprising the top construction experts in Saxony, therefore decided to draw up a project themselves. Prof. Johann Andreas Schubert, a local man from Wernesgrün, was appointed design engineer. He was already held in high esteem and had proved his technical skill by having constructed the first German locomotive the Saxonia and the first German steam ship.